The Use of a Wonder Tale

Most people have not heard of a Wonder Tale

It is a tale told in the realm of the fantastic. For example, the Gods and Goddesses of Greece. They had larger than life stories. Betrayals, bickerings, love affairs, unusual weather, out of the ordinary happenings, that causes an impact in their world and the human world. 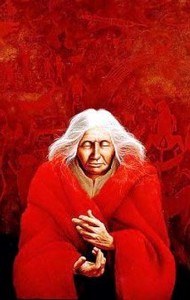 Making a story larger than life is not about making it grandiose or huge for the sake of it, but to bring in the element of wonder. To offer the possibility of something bigger than the story, that is hiding within the tale, you are telling. This landscape of ‘wonder’ then provides further impact and meaning in the telling of it.

In his classic reference book, the 1977 [1946] edition of The Folktale, Thompson defines a wonder tale as: “A tale of some length involving a succession of motifs or episodes. It moves in an unreal world without definite locality or definite creatures and is filled with the marvelous. In this never-never land … the characters and motifs of fairy tales are simple and archetypal … and include magical helpers, often talking horses, or wild animals, or birds.”

For example in a tale I tell about the 2 Million Year Old Woman (you can hear it here), I weave this idea of an ancient woman whose wisdom is beyond our understanding, into an autobiographical account that I call Taking a Leap of Faith.

The purpose of crafting a story as a Wonder Tale is to offer a reminder of an ancient rhythm that is timeless, but never-the-less potent. As you will hear, it still has clout, and it’s a wonderful dive into the imagination. Just thinking of a 2 Million-Year-Old Woman alive on the planet, that influences us, is fantastical.

In the tale, Taking a Leap of Faith, I share about a change in career. In the story, I show how this ancient one has influenced me since my childhood, always hovering in the background, urging me into a truthful life. It adds a certain weight to the story. 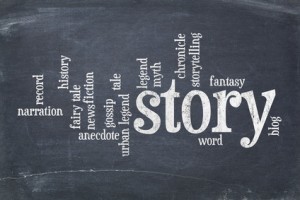 It’s best if you can find someone to listen to the tale. They can add things to it, that they see in the realm of the fantastic, that you haven’t. If you can’t find someone, just be outrageous and take a leap of faith with your story.

Let’s imagine a business scenario. Say it’s about a job of printing for a client. There’s a problem. The printers you normally use have shut down. You’ve only just found out and your client needs the posters yesturday. In steps our intrepid Hero – Pete. Dress Pete up. Maybe he’s wearing a long coat of gold and red with strange symbols on it. Give him wings, allow him access to telepathy, perhaps he has a hotline to God.

Because Pete’s just one of those people who’s like that. He has contacts everywhere! Pete saves the day, tracks another Printer company down and the client gets the goods.

You can go much much further with this

The purpose of doing it is simple. It’s to draw out the fantastical realm to bring emphasis, to make a point, to engage your audience. To describe for example, the extra mile your company goes too, without saying you go the extra mile.

For example the tag line could be, Pete isn’t the only one. We all have super-powers to serve our clients.

Of course it depends upon the type of company and its brand image, but you can use a Wonder tale to illustrate a company’s story, ethos, culture, and brand.

And that’s the purpose of it. Used in a personal story, as in mine, it can inspire others for example, or as a marketing story to explain the ethos of a company.

I leave you with this thought. What kind of Wonder Tales could you tell about your business?

And do you have a 2 Million-Year-Old Woman lurking in the background in your life?

Cos I bet you do. There, but just out of sight.

The Voices that Silence You – The Abduction of Creativity (6)

The Abduction of Creativity (2) – El Duende

The Creative Fire and the Abduction of Creativity (1)

The Leap of Faith – A Wonder Tale in real time

Thank you Penny. Most kind. It’s a great thing to take a memory or a real story and add a sense of myth to it. Takes it to another level.

I really like all the points you have made here.